What is food to one man is bitter poison to others. ~ Lucretius

Depending on your insurance (or lack thereof), epinephrine auto-injectors cost money.  However, don't be foolish.  Those with severe allergies cannot afford to go without this medication.

Last year when my EpiPens expired, my family's deductible was not yet satisified.  Four EpiPens cost $407.66.  The pharmacy staff asked my Mom if she still wanted them.   Fortunately, that answer was yes.  I feel very badly for those who would have had to answer no.

…As many as 15 million people have food allergies. 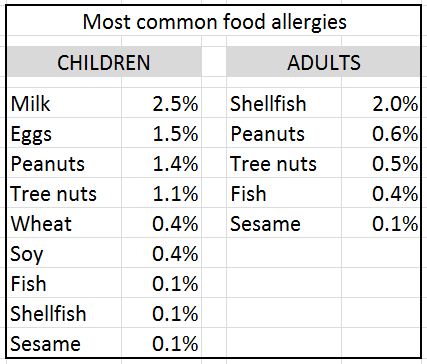 …An estimated 9 million (or 4%) of adults have food allergies.

…Nearly 6 million (or 8%) of children have food allergies with young children affected most.

…The Center for Disease Control (CDC) reported that food allergies result in more than 300,000 ambulatory-care visits a year among children under the age of 18.

…From 2004 to 2006, there were approximately 9,500 hospital discharges per year with a diagnosis related to food allergy among children under age 18 years.

…Eating away from home can pose a significant risk to people affected by food allergy. Research suggests that close to half of fatal food allergy reactions are triggered by food served by a restaurant or other food service establishment.

... ambulances in the state of Pennsylvania are not required to carry epinephrine auto-injectors.

…the number of allergies are projected to continue to rise over the years.

…not all schools ban potential allergens from their cafeterias.

…20% of all new allergies are discovered in schools.

…The Food Allergy and Anaphylaxis Network (FAAN) is backing legislation for schools to have at least one EpiPen on premises.  This is often called "Stock EpiPen" legislation.

…people can experince an allergic reaction just by the allergen being in the air around them.

…Teenagers and young adults with food allergies are at the highest risk of fatal food-induced anaphylaxis.

…Penicillin is the most common cause of drug-induced anaphylaxis.

…At least 40 people in the United States die each year as the result of insect stings.

…Between 24% and 60% of people with spina bifida have latex allergy.

…Life-threatening reactions to insect stings occur in 0.4% to 0.8% of children and 3% of adults.

…the symptoms of anaphylaxis range from (mild) coughing to (extreme) death.

…people can die within seconds while experiencing an allergic reaction.